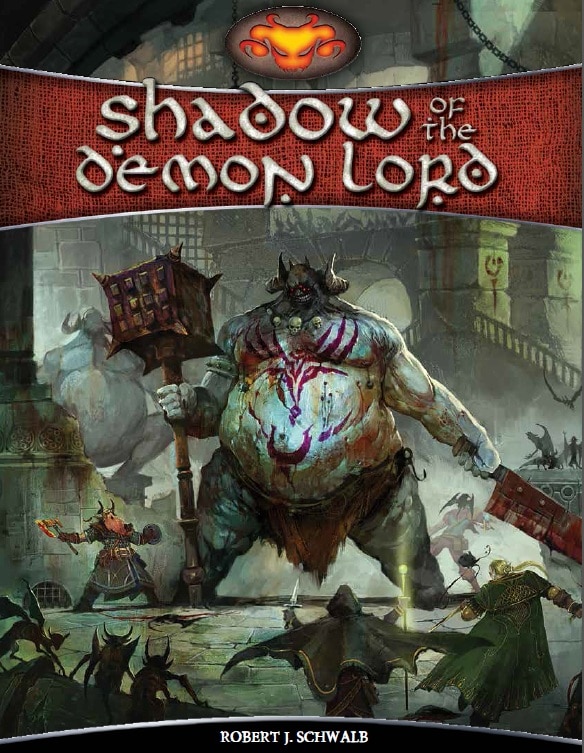 1. Rob, how did you get into role-playing games?
I was always interested in RPGs, specifically Dungeons & Dragons. I knew about the game and had vague ideas about how it worked, but I didn’t know anyone who played and didn’t run across the game aside from the cartoon in any official way for a few years until a neighbor sold me and adventure module for a quarter. The adventure was Rahasia by Tracy and Laura Hickman, and, though I didn’t have the rules, it sparked my imagination enough to design my own tabletop RPG, Passages, from scratch. A few weeks later, a kid I met on the playground, who became a lasting friend, helped me create a character using the red box rules, an experience I found, at the time, remarkably dull. However, when we played Keep on the Borderland the next weekend, I was instantly and permanently hooked.

2. You hit the rpg scene about the same time as I did (2006-2007), although your footprints are way deeper. Those are only about 10 years, still it seems, that you’ve been there forever. How did you manage to do that?
In fact, I started working in the business part time in 2001, though it took almost a year for the first book to hit the shelves. Discipline, perseverance, and a steady supply of booze have helped me make inroads into the scene. At the start of my career, I would take on any project I could, and I did work for Green Ronin Publishing, Goodman Games, Paradigm Concepts, AEG, Fantasy Flight Games, Necromancer Games, Kenzer, and Mongoose. Out of all the early works, three books opened doors for me: Book of Fiends and The Black Company Campaign Setting for Green Ronin and Grimm for Fantasy Flight Games.
In 2003-2004, Green Ronin Publishing hired me to be the d20 line developer, wherein I took over managing the d20 supplements from Chris Pramas, who was starting work on Warhammer Fantasy Roleplay 2nd Edition, to which I contributed as well. Not long after, I took over WFRP and, eventually, A Song of Ice and Fire Roleplaying, a game based on George R. R. Martin’s popular series of the same name.
On top of all that, I was still doing freelance work on the side. I helped Paradigm Concepts create Witch Hunter: The Invisible World and landed a few jobs for Wizards of the Coast, starting with Tome of Magic for 3rd Edition D&D. Work for Wizards of the Coast started picking up, and I had the pleasure of design a several 3rd Edition releases, including Tyrants of the Nine Hells with Robin Laws, Elder Evils, Exemplars of Evil, Drow of the Underdark, Player’s Handbook 2, and Monster Manual V.
As 3rd Edition started winding down, I parted ways with Green Ronin Publishing after accepting a contractor position at Wizards. I helped produce content and design game material for a variety of products, from Star Wars Saga Edition to a swathe of D&D sourcebook and articles and adventures in Dragon and Dungeon magazines to work on Gamma World to a novel and a set of Fortune Cards. I’m hazarding a guess, but my fingerprints are on something like 70% of the releases during that time.
Anyway, when 4th Edition was clearly ending, management brought me on board the 5th Edition design team and I worked on the game through all the incarnations of the design teams until I parted ways with Wizards in early 2014.
Since then, I’ve done a bit of freelance for Monte Cook Games, Green Ronin, and Sasquatch, but much of my time has been focused on my company, Schwalb Entertainment, and its flagship game, Shadow of the Demon Lord.
3. You’ve written a lot of stuff. What’s the product you are most proud of?
That’s a tricky question. I’ve had a hand in so many different projects, it’s hard to pick one. Also, my writing and game design has evolved a great deal over my career, so it’s probably easiest to zoom in on specific eras. For example, during my Green Ronin days, I’d say Tome of Corruption for Warhammer Fantasy Roleplay. My Wizards of the Coast days, the Dungeon Master’s Guide for 5th Edition is probably my proudest accomplishment. But, Shadow of the Demon Lord is the work of which I am most proud. There’s so much of me in that book, so much of my anxieties, frustrations, and love for the hobby.

4. „Shadow of a Demon Lord“ looks great – why (apart from the terrific cover) should I buy it?
You should buy the game because you want to play horror fantasy adventures in a world teetering on the brink of annihilation with a slick, tight set of rules containing familiar elements to make them easy to learn but presented in an entirely new manner. You want this game because you can create a character in a few minutes and the process of character creation is something you engage for the life of the campaign. You also want this game because you are a busy adult and to play a full campaign of Shadow, you need only to devote 11 game sessions to have the full experience.

5. What’s in stock for Shadow? Which products can we expect in 2016/2017?
The main rulebook, Shadow of the Demon Lord, contains everything you need to create and play characters and to create and run adventures for the game. That’s all you need. In addition to the core rulebook, I’ve released 27 PDF products, most of which were unlocked as stretch goals from the Kickstarter campaign. Nineteen of the products are adventures, one written by myself, and the remaining eighteen are written by some of the best designers in the business such as Monte Cook, Chris Pramas, Rich Baker, and many, many others. There are also a few smaller PDFs, called Poisoned Pages, that focus on one area of the game and add detail. Dark Passages gives GMs some handy tables to generate weird books one might find in the world, while Fever Dreams provides advanced rules for diseases. The other supplements are also available as print on demand and include Tales of the Demon Lord, a set of eleven adventures, the Demon Lord’s Companion, a meaty expansion that adds ancestries, paths, spells, equipment, creatures, and more, and Tombs of the Desolation, a supplement intended for players and GMs that focuses on an expanse of undead-infested wasteland and the surrounding lands.
I have a ton of products planned for release this year. Tales of the Desolation is the next big release. It’s a set of four connected adventures for expert characters focused on the region covered in Tombs. After that, we have Terrible Beauty, a sourcebook for players and GMs that reveals secrets of the faeries. Chronicles of the Demon Lord is the first chunk of fiction I’m releasing and it includes a set of dark and nasty stories by Elizabeth Bear, Bill King, Richard Lee Byers, Erik Scott de Bie, Erin M. Evans, and James Lowder. Later this year, I’ll release more adventures written by Stan!, David Noonan, and Ken Hite, more Poisoned Pages installments, Exquisite Agony, a delicious book about Hell, a book covering some weird cults, another book covering the frozen wastes, and another book that explores demons and the Void. The big release is Fire and Blood: A World of the Demon Lord, which presents a new setting for the game.

6. The brand new German publisher System Matters ist going to do a German version. How did that contact (and contract) come to be?
David Zumsteg made it happen. He backed the campaign and approached me early on to do a German translation. David has the fire in his belly, the drive to make awesome things happen, so I was fully on board.

7. Will the German publishers be able to change things in the rulebook and/or are they allowed to produce shiny new German-language material?
The German translation will be just that, a translation of everything I have released so far. We’re still in talks about producing new content for Shadow of the Demon Lord und
er their imprint.
8. Talking about German role-playing games – just out of curiosity: Is there anything you know about the German scene?
Sadly, I know very little. I know about Das Schwarze Auge and Engel, but those have been around for a while. I probably know about others, but my professional focus, largely, has been on games to which I can contribute. I had two years of German in high school, but I only recall a few Marxist quotes and curse words.

9. You were one of the lead designers for D&D 5th Edition. Do you understand Hasbro’s policy not to publish a German language version? The new edition ist quite popular over here and I have no clue why they should do that.
No, I wasn’t a lead designer: Those titles go to Mike Mearls and Jeremy Crawford. I was part of the core design team, however, and am proud to have contributed to the game. I have no insights into Hasbro’s company policies.

10. Thanks for your time! Now is your chance to tell the readers whatever you have wanted to tell them all the time.
First, thanks for the interview. I love to talk (type), especially about Demon Lord. I’m thrilled to be working with my partners in Germany to extend the game’s reach into new markets. Finally, I wanted to thank everyone who is playing, reading, and enjoying my little game. There are even greater things coming and I can’t wait for you to see what madness I release into the universe next.